PORPHYRY is the most resistant stone used for exteriors, result of an intense volcanic activity about 260 million years ago. There are 2 types of porphyry quarries: deposits with stratified porphyry formed by vertical clefts and quarries formed by blocks.

STRATIFIED PORPHYRY is obtained by quarries with very neat vertical clefts, due to special conditions of its creation millions of years ago. The cooling of the magma was very fast and then emphasized by subsequent tectonic movements that conditioned both the colour and the natural splitting in slabs. This geological feature allows to obtain products with naturally smooth surfaces, without particular treatments. After the quarrying and selection of the raw material, the first product obtained is the crazy paving that can be later worked and transformed in cubes or tiles with natural surface and split or sawn sides.

Selection of the material

Side finishing
MASSIVE PORPHYRY Porphyry massive blocks are generally parallelepiped. Due to its hardness, it is required a special extraction technique that considerably reduces the use of explosive that could ruin the blocks with cracks.
After the extraction, blocks are sawn by gangsaws or diamond discs and successively worked. Surface can be flamed, that is, it is heated with a flame to break its quartzes. This process brings out the colour of the stone and make the surface slightly rough and anti-slip, suitable for pedestrian areas. Other types of surface finishing are flamed+brushed, that makes the surface soft to the touch, or honed and polished.

Sawn of the blocks

Surface and side finishing
Why choose Porphyry?
ENDLESS BEAUTY TESTIFIED BY CENTURIES OF HISTORY Porphyry has been known since ancient times. Assyrian-Babylonian, Egyptian and Roman civilizations used it for buildings, vases and objects.
In Roman times it was the symbol of prestige and luxury. The rooms reserved for royal births were completely tiled with porphyry, and many emperors, such as Nero and Constantine, were buried in sarcophagi made of this stone.
It was sought after for its colour, its grain, its sheen, its hardness and resistance to chemical and atmospheric agent. This material typified imperial ambitions, majesty and power. These features made it one of the most important building stone and thanks to them it has been maintained through the centuries until today.
Porphyry used for exteriors is not subjected to processes of ageing due to chemical and physical agents produced by atmospheric factors and pollution, furthermore it has a high level of resistance to chemical attack that makes it particularly suitable in industrial and mechanical plants, foundries and petrol pumps, also in presence of lubricating oils. Today as in the past porphyry is an excellent material for people that want a beautiful, but also resistant and durable, work suitable for high traffic areas, with chemical agents and extreme atmospheric conditions, for an endless beauty.

ANTI-SLIP AND PARTICULARLY RESISTANCE TO ABRASION Porphyry thanks to the hardness of its minerals, is suitable for external floors and/or with steep slope, because it maintains over time its coefficient of friction, also in high foot and vehicle traffic areas.
It is an anti slip stone that allows a very good adhesion also with rain, ice and snow.

MINIMUM MAINTENANCE Porphyry does not need particular maintenance, as proved by squares and roads of many cities. It can be easily washed with soap and water.

RESISTANCE TO IMPACTS Porphyry is very strength, for this reason it is used where it is particularly exposed to impact from objects, such as kerbs, and the passage of heavy vehicles.

FREEZE-THAW RESISTANT Porphyry is suitable for external use also because it is freeze/thaw proof.
This is proved by many porphyry squares and road in high mountain cities, where in winter temperature usually is below zero. 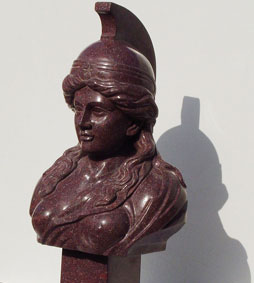 Porphyry, a natural stone that combines the charm of its colours with excellent technical features, suitable for any application , both interiors and exteriors.
^